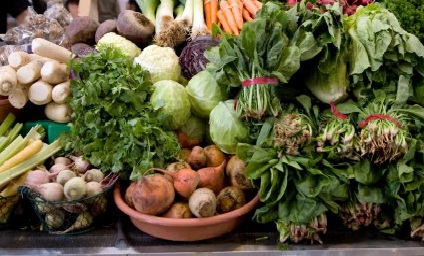 With the concern about food safety, farmers markets popularity is increasing as people look for organic fruits and vegetables.  From college campuses to city blocks, farmer’s markets are a staple of our culture.

In rural New York, farmers travel to Brooklyn farmers markets to sell their crops. With the demand for safer food, urban farming provides consumers with food from a trusted source while decreasing the amount of food affected by genetic enhancements. This growth of farmers markets leads to increases in urban farming.

In addition to supplying healthy organic food, in some areas, urban farming utilizes unused city resources, like abandoned buildings and lots; spaces are converted to urban farms, like the greenhouse on an abandoned dock in New York City. In addition to reclaiming abandoned property, many urban farms are located on city rooftops. This helps keep buildings cooler and saves energy by lowering the cost of air conditioning.

The demand for urban farming provides jobs and education, with many farming programs opening in major cities.  Children and adults learn about the benefits of growing local while working on a farm; giving them the knowledge of what it takes to start their own urban farm.

Even with the benefits of urban farming, there are concerns as well. Cities often contain more pollution than their outskirts which raises concerns the pollution will contaminate the city soil and its crops.  While the crops help make the air cleaner, some cities are too polluted for harvesting healthy crops.

The New Trend is Not So New

Urban farming is becoming noticeably trendy in the United States; however it’s not a new concept. Beginning in Ancient Egypt, urban farming is centuries old.

Grange Farm utilizes over two acres of rooftops, in Brooklyn and Queens, New York. Since opening in 2010, they’ve sold more than 40,000 vegetables to their.  Their goal is to bring delicious vegetables to their community while building New York into a more sustainable place to live with positive effects to the environment.

Grange Farm sells locally to restaurants as well as operating farm stands at farmers markets throughout the boroughs.  They also sell privately to CSA members but do not sell beyond the boroughs of New York City.  Their business however transcends the island of Manhattan as they consult on urban farm set ups throughout the United States.

Grange also offers a non-profit program called City Growers.  With learning on the farm and in the classroom, this program educates students about urban farming, health, and sustainability.  The program’s goal is making future generations more environmentally conscious while learning ways to make a greener New York.

While continuing to produce crops since Zenger Jr.’s death, the farm is also a non-profit for educational out reach.  Along with keeping crops sold independently, they educate children on sustainable living.  The basis of the educational program at Zenger comes from the idea that healthy food comes from healthy soil even in the city.  This educational program teaches about food, farming, and wetland conservation and how these things make for a healthy, thriving, city environment.

Zenger Farm offers farm field trips where students can visit and learn about the farm and the importance in keeping a green community and a one-week summer camp where students actually work on the farm.  Weekend workshops are also provided—in workshops adults are taught farm skills by working on the farm and learning about buying healthy organic food on a budget.  Zenger takes pride in their community outreach and sharing the importance of their urban farm in improving the Portland community.

B&T Farm, based in the Los Angeles neighborhood of Hacienda Heights, began in the backyard of Brett Wyatt.  After raids at the Buddhist monastery he was studying at, he began working at a farm in Thailand.  It was there he met his wife Tanya and decided to continue their passion for growing in the United States where they specialize in oyster mushrooms and sell to customers at farmers markets on the weekends. Oyster mushrooms require a rigorous process of boiling the seeds to ensure no other mold grows around the mushrooms. The Wyatts also grow crops native to Thailand as well as crops more prominent in the United States, such as spinach and broccoli.

Detroit’s Hantz Farm boasts the largest Urban Farm in the United States.  With Detroit’s economic downturn from the failing auto industry, thousands of houses stand empty. Once the properties were vacated, the land reverted back to the city. No revenue could be collected and these lots set vacant so many were sold.

Hantz Corporation began buying the land from the government to build into urban farms and community gardens.  In doing this, Hantz is creating jobs, offering healthy food choices, and revitalizing the land while helping the city of Detroit.

In addition to their urban farms, Hantz is planting trees to help the environment and beautify the city. By helping the community through growth, Hantz is bringing the communities together while helping each other and getting involved in restoring the city.

Urban farms help improve a city’s environment, economy, land, and community.  Many major cities have community farms where anyone can start a plot and plant what they want to grow. If you’re interested in getting involved, check with your city. No matter how dense the population, there may be a plot of land waiting for you.  Urban farming allows anyone with interest to become involved and help improve their environment and live a sustainable lifestyle.

Free Report, Building Nesting Boxes for Your Laying Hens, when you sign up for our newsletter.

I am a participant in the Amazon Services LLC Associates Program, As an Amazon Associate I earn from qualifying purchases.

The owner of this site is an affiliate of some of the products and/or services recommended herein. Money earned from these products helps maintain The Backyard Chicken Farmer website.

This website uses cookies to improve your experience while you navigate through the website. Out of these, the cookies that are categorized as necessary are stored on your browser as they are essential for the working of basic functionalities of the website. We also use third-party cookies that help us analyze and understand how you use this website. These cookies will be stored in your browser only with your consent. You also have the option to opt-out of these cookies. But opting out of some of these cookies may affect your browsing experience.
Necessary Always Enabled
Necessary cookies are absolutely essential for the website to function properly. This category only includes cookies that ensures basic functionalities and security features of the website. These cookies do not store any personal information.
Non-necessary
Any cookies that may not be particularly necessary for the website to function and is used specifically to collect user personal data via analytics, ads, other embedded contents are termed as non-necessary cookies. It is mandatory to procure user consent prior to running these cookies on your website.
SAVE & ACCEPT